Beginning Message
Hey everyone, I realise I haven't been very active on my blog this week but I am about to please someone.

The idea for my animation.
As you may or may not know, I have chosen to animate the Life of a Mushroom.
I will be telling the 'story' through a series of 'pages from a book' lets begin..

The scene opens with a desk, a large heavy desk, it has upon it a lamp, a book and a pocket watch.
The camera slowly moves towards the table until we see the book, the lamp flicks on and we can read what the books' cover says. 'MicroBiology Analysis: The Mushroom.' near the bottom of the cover it will say Daniel Bright 2010 UCA Rochester. Along the spine of the cover it will say 'Microbiology Analysis: Unit 6'. The book will be 'leather-bound' and will be dark brown with gold 'trims'

The book begins to open, the cover slowly opens and lands on a page, Intro into Mushrooms, it reads, in the middle of the page is a strange cylindrical object, it passes through every page in the book, this cylindrical object is a 'hologram projector' the animation story will be played alongside diagrams shown on each page, the viewer will get a look at the diagram, and then see the animation of what the diagram depicts. My first example is when;
-Mating Type
+Mating Type
Meet, this is called 'Plasmogamy' (See end of post for definition.)

Image is sideways, as it was taken using my phone.


The rest of the animation will follow the steps of the MicroBiology Scenario which is below, starting from number 1, and working around to number 8: 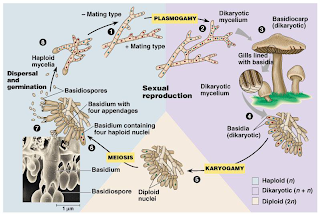 The book will then close, and the light turned off, the screen will turn black and any accompanying music will fade with it.

Last Note
If you have anything to say, positive or negative, I WANT to hear it. Rip into me if you have to, I strive on feedback. I will try to make this animation my best one yet. I look forward to hearing from you guys.

Glossary:(Taken from WikiPedia)
Plasmogamy is a stage in the sexual reproduction of fungi. In this stage, the cytoplasm of two parent mycelia fuse together without the fusion of nuclei, as occurs in higher terrestrial fungi. After plasmogamy occurs, the secondary mycelium forms. The secondary mycelium consists of dikaryotic cells, one nucleus from each of the parent mycelia.
Microbiology (from Greek μῑκρος, mīkros, "small"; βίος, bios, "life"; and -λογία, -logia) is the study of microorganisms, which are unicellular or cell-cluster microscopic organisms.[1] This includes eukaryotes such as fungi and protists, and prokaryotes. Viruses, though not strictly classed as living organisms, are also studied.[2] In short; microbiology refers to the study of life and organisms that are too small to be seen with the naked eye. Microbiology typically includes the study of the immune system, or Immunology. Generally, immune systems interact withpathogenic microbes; these two disciplines often intersect which is why many colleges offer a paired degree such as "Microbiology and Immunology".
Posted by D Bright at 11:56 am

Hi Dan! Can you rotate your images before you post them? I am getting a stiff neck trying to look at them! :)

This looks like a great idea Dan, no-one else is aiming to do anything like it. So stop procrastinating and make it, or you'll regret it come the end of the project. You always seem to have great ideas but are too rushed to finish them, if you make this like you plan to, I can't see how you wouldn't get a great grade.

Plus, this is our last chance this year to show what we've picked up over the last few months, so we might as well go for it. We've got months off in a few weeks where we can waste as much time as we like, but the next four weeks should really be put towards solid work.

ah thanks guys for the comments :),

@Sam I sure as hell will try this time (I know i've said it before but I want a good grade!!!)

D Bright
I am a very capable artist, designer and animator with a huge idea factory in my head. I am currently studying for a BA Hons in CG Arts & Animation, at the University for the Creative Arts at Rochester, Kent. This blog will document my progress during my study.