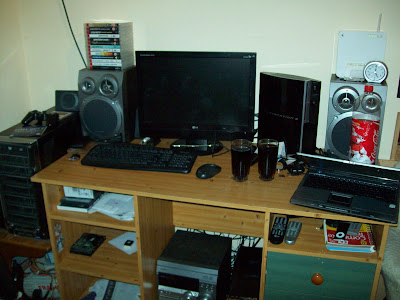 Theres mine, I have my Tower PC to the left of my desk, specs:

5.1 Surround sound set up for computer.

Ah and my laptop. Just an ordinary pants laptop :P

Let me know about yours people :D

I would post mine up but there not in certain area like yours. I got my laptop anywhere, the tower pc downstairs, my 360, ps3 and wii in my room connected to my HD tv.

I posted mine up last week when submitted my maya work fill free to view it :)

D Bright
I am a very capable artist, designer and animator with a huge idea factory in my head. I am currently studying for a BA Hons in CG Arts & Animation, at the University for the Creative Arts at Rochester, Kent. This blog will document my progress during my study.